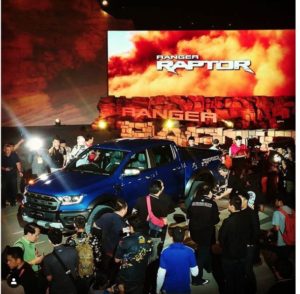 Thailand – Ford has unveiled its first performance-tuned Ranger Raptor at a world debut in Bangkok.

The automaker made its global debut of the first Ranger Raptor bakkie at a world-class event on Wednesday (February 7 2019).

More exciting is the fact that this bakkie will also be built locally at the Silverton factory in Pretoria.

While the Ranger Raptor has been hugely-anticipated, and is most certainly a striking bakkie, South African motorists could be puzzled by the fact that it’s is only available with a 2.0-litre bi-turbo diesel.

However, the automaker is convinced the smaller engine is the best option for its new bakkie.

Ford announced in September 2017 that its hugely popular Ranger bakkie will be available in an off-road performance variant for the first time. The purpose-built, desert-racing inspired bakkie joins the Ford Performance family, as the new ‘Ranger Raptor ‘
Ford SA says: “The Ranger Raptor will be coming to South Africa, with further information to be revealed in due course. There is no estimated time of arrival as yet. 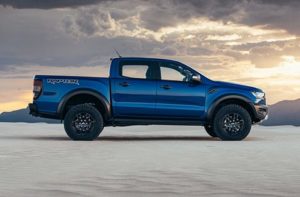 “Designed and engineered to deliver an adrenaline pumping experience, Ford Ranger Raptor sports a head-turning exterior look that exudes toughness as well as a level of capability and off-road performance never before seen in the mid-size bakkie segment.

“Sharing the same nomenclature as the F-150 Raptor, the world’s most extreme production bakkie, Ranger Raptor is in a class of its own among mid-size off-road performance vehicles.”

So what makes the Ranger Raptor distinctive?

In terms of styling, the Raptor features a new, huge grille, bumper, bold wheel arches and fenders with grey accents. Ford says there are new sheet moulding compound (SMC) front fenders which wrap around the 150mm wider stance from the track. It sports 2.3mm thick high-strength steel for underbody protection. At the rear there’s a unique box side, redesigned bumper and tow-bar integration along with a functional aluminium die-cast side step. Inside, there are beautiful sculpted eats, upholstery and signature blue stitches in lightning blue. Ford reckons its cabin has been designed for comfort and confidence with the Ford Performance DNA running throughout its styling. The steering wheel has a red stripe on top of the wheel as a centre marker. It also has unique spokes, debossed graphic and magnesium paddle shifters. 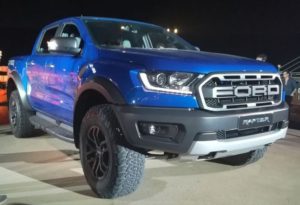 The other aspect of the Raptor’s speciality is its Terrain Management System (TMS) which has six various modes to choose from to suite any kind of driving surface, including one called Baja mode. Despite the Baja Dessert Race being highly acclaimed internationally, we reckon this could have been better suited as the Dakar mode for local buyers. But then again, that would be stepping on Toyota’s toes with its Hilux.

Ford reckons: “Each mode has been precisely calibrated to offer the best possible combination of technologies working in unison to tackle the chosen driving style with sangfroid.”

Each mode can be selected via a dedicated five-button switch located on the steering wheel. 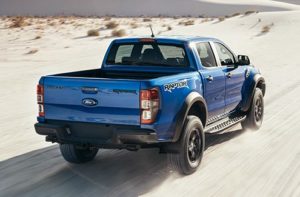 To Find out more Contact us on 0877248040 or visit 115 Flanders Drive, Mount Edgecombe.
www.umhlangaford.co.za